More than 11,000 years ago, hunter-gatherers living in upland areas from Anatolia to the Red Sea embarked on a great experiment, one that would transform both human society and the natural landscape. The experiment was agriculture—specifically, the cultivation of domesticated plants and the raising of domesticated animals—and it eventually gave rise to all that is familiar in our modern world.

Sometimes called the “Neolithic Revolution,” but more accurately described as the Neolithic transition, the gradual shift from hunting and gathering to agriculture happened at many different times and in many different places throughout human history. Archaeologists have identified 10 widely dispersed and independent centers of domestication around the world—southwestern Asia, China, Mexico, New Guinea, South Asia, Africa, eastern North America, and three locations in South America—with dates of first domestication ranging between 9500 and 3000 B.C. (Price and Bar-Yosef 2011). From these points of origin, domesticated species and knowledge of agriculture traveled great distances, making converts of hunter-gatherers along the way.

How Farming Changed Everything

Wherever it occurred, the Neolithic transition fundamentally changed peoples’ relationships with one another and with the environment. For tens of thousands of years, Archaic hunter-gatherers had moved with the seasons to obtain the wild animal and plant resources on which their lives depended. Human populations were small and widely dispersed, and their impact on the landscape relatively small. Social organization was simple, characterized by bands made up of related families.

Farming changed all that. As people embraced agriculture as a way of life, they had to stay in one place most or all of the year to plant, tend, and harvest their crops. Populations grew exponentially and began aggregating in permanent settlements, some quite large. Impacts to the environment were significant and visible, as land was cleared of native vegetation, water was (often) impounded or otherwise managed, and other natural resources were used in increasing quantities to support daily life—sometimes to the point of depletion. With more people living closer together and competing for finite resources, they had to devise new strategies and institutions for managing their relationships. Over time, social, political, and economic organization grew increasingly complex in trajectories that can be traced to the present day.

The Neolithic Transition and the Origins of Pueblo Culture 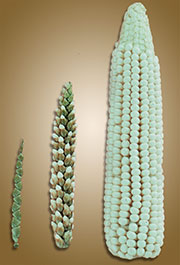 The Neolithic transition in the southwestern United States is an example of agriculture acquired, not independently developed. Morphological and genetic evidence suggests that corn, or maize, was first domesticated from the wild grass teosinte in southern Mexico as early as 7000 B.C. (Matsuoka et al. 2002). Over the next several thousand years, corn made its way north, appearing on the Colorado Plateau by about 2200 B.C., as documented at a site in north-central New Mexico (Huber 2005).

“People had a long history with corn in the Southwest before they became committed agriculturalists,” said Crow Canyon archaeologist Shanna Diederichs, who has studied early agricultural sites in both the Pueblo Southwest and the Nile River Valley in Egypt. “Archaic people in the Four Corners area [of the American Southwest] experimented with it for a long time—more than a thousand years. But isotope analyses of human bone have shown that by about 500 B.C., more than half the diet consisted of corn. It’s that dependence on corn and its impact on cultural identity that we use to mark the beginning of Pueblo culture.”

A thousand years after Pueblo people committed to farming, many of the same trends seen in other parts of the world were playing out in the Four Corners area as well. At the Dillard site, an ancient Pueblo village where Crow Canyon conducted test excavations from 2011 to 2014, archaeologists have documented part of a sprawling agricultural community dating from the seventh century A.D. (Basketmaker III period).

“After the economy shifted from hunting and gathering to farming, the population began to grow and expand,” said Diederichs, who directed Crow Canyon’s excavations at the Dillard site. “Colonizing populations began moving into the central Mesa Verde region in droves during the sixth or seventh century to take advantage of the rich loess soils. And that’s when we begin seeing the development of early communities, where people are cooperating with other people they’re not necessarily related to.” 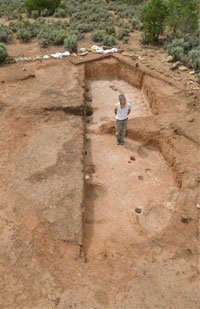 Partial excavation of this pithouse at the Dillard site reveals a main chamber (foreground) and an antechamber.

The early community investigated by Crow Canyon includes not just the Dillard site but also more than 100 small farmsteads located within a 1,200-acre expanse surrounding the larger village. Archaeologists think the original settlers may have migrated from diverse places, bringing different technologies and traditions with them. For example, according to Diederichs, there are different styles of pithouses at the Dillard site—some are deep, some are shallow; some consist of one chamber, others of two. There is also variation in how roofs were constructed and in the types of floor features present. Though some of these differences may be related to structure function, others might reflect the multiple places of origin of a colonizing population.

“With lots of people possibly from different places converging on one small area, they probably faced some social challenges,” said Diederichs. “Integrating the various community members would have been key to the success of the group.”

One of the ways people around the world attempt to promote social cohesion is through the construction of what archaeologists call “public architecture” or, sometimes, “integrative architecture.” In different societies at different times, such construction might take the form of monumental civic architecture, such as the massive public plazas of Shunet el-Zebib in Upper Egypt; important religious structures, such as the Parthenon of ancient Greece; or other public venues that unite people in common cause, such as a sports stadium in any major U.S. city. But it’s always big—larger than what an individual family would need—and it’s often centrally located within communities.

The most prominent architectural construction at the Dillard site is a large (11.5 meters in diameter), round, semisubterranean structure called a great kiva—a clear example of public architecture. Great kivas were the Pueblo response to a universal human challenge: how to create unity out of diversity, how to achieve a sense of shared purpose, how to build a real sense of community. Archaeologists believe that, throughout the Pueblo world, people sought to strengthen social order through group rituals, religious ceremonies, and civic events performed in great kivas. And it must have worked, at least most of the time, because Pueblo people kept building and using these structures from the A.D. 500s through the early 1400s.

Standing on the edge of the massive, sloping depression at the Dillard site—all that remains of the great kiva today—one can imagine the villagers and other community residents gathered in solemn congregation some 1,300 years ago. For Diederichs, it’s not hard to place that scene in a much broader, global context. “Throughout history, wherever people decided to become farmers, they had to deal with the consequences—some good, like being able to grow surplus food; others more challenging, like having to cope with increasing population. And we see them dealing with those issues in broadly similar ways, even if the particulars varied from one place to another. So, ancient Egyptians and Greeks built plazas and temples; Pueblo people built great kivas. But all were trying to make this new way of life work.”

. . . about the transition from hunting and gathering to farming in “The Consequences of Sedentism: What Happens When Mobile Hunter-Gatherers Settle Down?” (Gil Stein, Center for Middle Eastern Studies, University of Chicago).

. . . about the Neolithic transition in the American Southwest (article by Timothy Kohler in the Proceedings of the National Academy of Sciences).

. . . about new research examining the link between agriculture and human bone density: When Humans Quit Hunting and Gathering, Their Bones Got Wimpy (reported by National Public Radio).