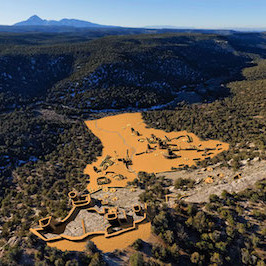 Crow Canyon archaeologists designed the Village Testing Project to complement the Center’s earlier research in the nearby Sand Canyon locality. Our research in the Sand Canyon locality suggested that large villages had formed rapidly in the mid-1200s as people moved from small upland settlements to large villages in canyon environments. The Village Testing Project focused on the investigation of large, late sites outside the locality in an effort to determine whether this aggregation might have been part of a larger phenomenon in the central Mesa Verde region.

The testing program conducted at Woods Canyon Pueblo and Woods Canyon Reservoir (Site 5MT12086) examined whether the changes through time in settlement patterns, subsistence practices, and the use of the cultural landscape that were identified in the Sand Canyon locality also occurred in the Woods Canyon community. Crow Canyon also conducted limited testing at Yellow Jacket Pueblo and the Hedley Site Complex.