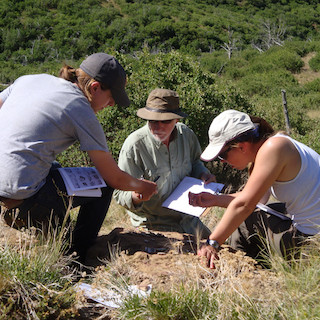 The Village Ecodynamics Project (VEP) is an award-winning multidisciplinary and multi-institutional collaboration among scientists and other researchers studying the long-term (A.D. 600–1760) interaction between Pueblo people and their environment. Funded by National Science Foundation (NSF) grants awarded to Washington State University, the project employs an innovative approach to manipulating large, diverse data sets to “predict” the past.

In 2013, the Shanghai Archaeology Forum (SAF) selected the VEP Project as one of 10 top projects in the world for its “major archaeological research findings” and for having “achieved distinction in innovative, creative, and rigorous works, and generated new knowledge about our human past.”

For more than a decade, archaeologists, geologists, hydrologists, geographers, computer scientists, and economists from institutions across the U.S. and Canada, including Washington State University, the Santa Fe Institute, and the Crow Canyon Archaeological Center, worked together to develop sophisticated computer-simulation programs based on geographic information systems (GIS) technology. The programs allow them to create “virtual” Pueblo families living on computer-generated, geographically accurate landscapes—and then to observe how both people and environments respond to changes in specific variables such as precipitation, population size, and resource depletion. By comparing the results of the computer simulations with real archaeological evidence, researchers are able to identify the conditions and circumstances in the past that might have produced the archaeological patterns actually observed in the field.

The VEP began in 2001 and consisted of two phases: Phase I examined the Pueblo occupation of a 1,827-square-kilometer area in the central Mesa Verde region in southwestern Colorado. Phase II expanded the original study area to include Mesa Verde National Park proper (for a total of 4,569 square kilometers) and an additional 6,955-square-kilometer area located in the Rio Grande region of north-central New Mexico. Archaeological, biological, and linguistic evidence, as well as Pueblo oral history, strongly suggest that many of the Pueblo inhabitants of the Mesa Verde region migrated to the northern Rio Grande in the late thirteenth century.

Data collection for the project involved field survey in addition to the assembly and analysis of existing data recorded during a century’s worth of previous archaeological work in the study areas. In the end, information on more than 18,000 archaeological sites in the central Mesa Verde region and more than 6,000 sites in the Rio Grande area was amassed, organized, and entered into a large database for use in the computer simulations. Variables such as site location, size, type, and estimated duration of occupation were used to reconstruct ancient settlement patterns through time. In addition, VEP researchers incorporated soils, climate, and hydrological data into their simulations.

Primary research associated with the VEP was completed in 2014, but multiple publications for both professional and public audiences are planned, and the data sets and techniques developed during the project will be invaluable to scientists for years to come. For more information, including a a list of project personnel and periodic research updates, see the Village Ecodynamics Project on the Washington State University website.

Hear what the scientists have to say

In 2014, six researchers who collaborated on the Village Ecodynamics Project sat down in front of the camera to talk about their work. In this series of short video clips—supported by maps, photos, graphs, and other illustrations—they discuss computer simulation, what they learned about the past, and what the results of their study may mean for society today and in the future.