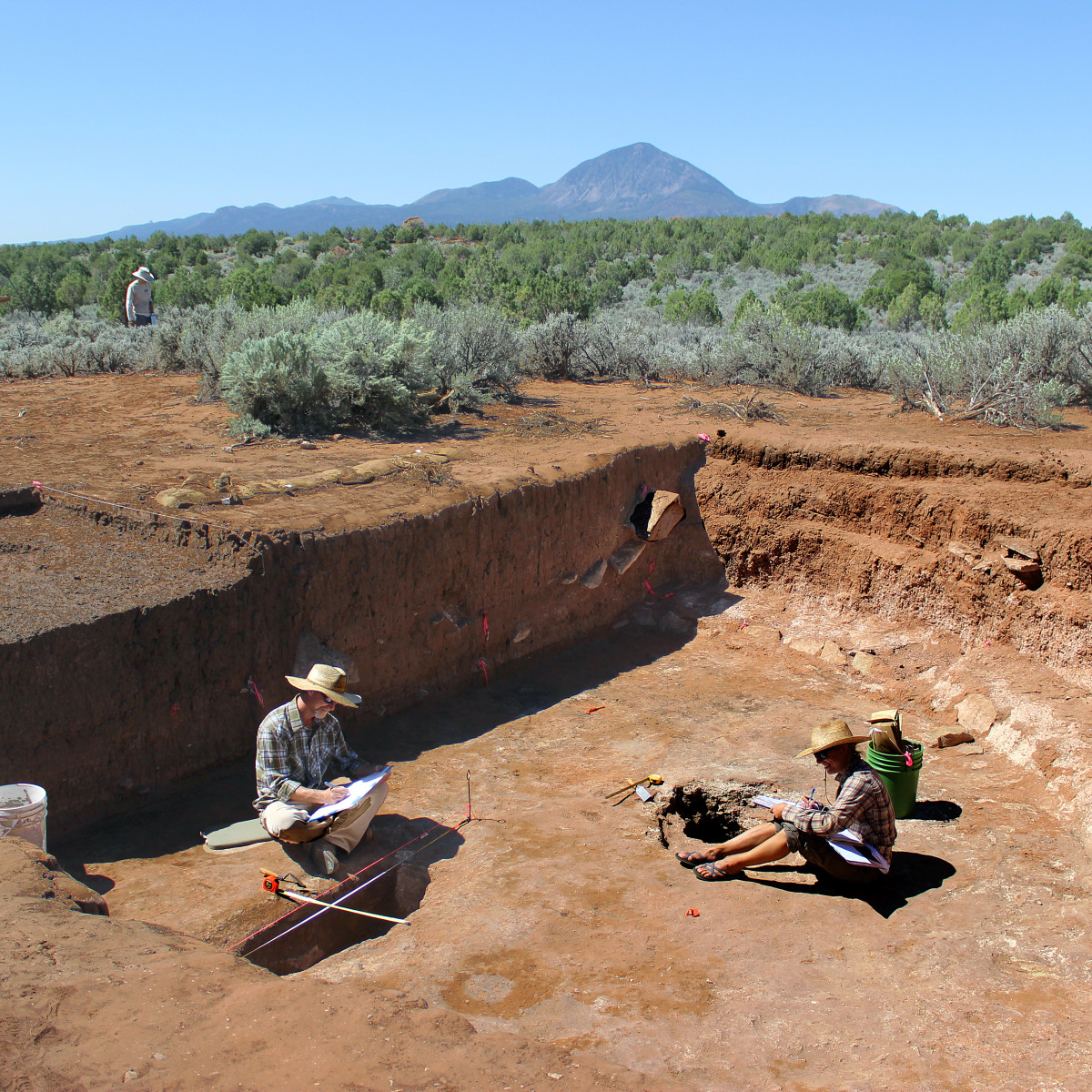 Starting in 2011, Crow Canyon archaeologists, assisted by student and adult participants in the Center’s archaeology programs, began field investigations at selected Basketmaker III sites in Indian Camp Ranch. Because relatively little is known about this early chapter in Pueblo history―and because this was Crow Canyon’s first foray into Basketmaker archaeology―researchers had many questions. Where did the Pueblo people who first settled the central Mesa Verde region come from? How and why did early communities develop? What impact did a growing farming population have on the environment? And what are the environmental and social legacies of the Basketmakers on later Pueblo populations in the region?

A large expanse of plowed red earth punctuated at intervals by patches of soft green sagebrush and darker juniper suddenly comes into view as you crest the hill west of the Crow Canyon Archaeological Center campus. On the near horizon looms Sleeping Ute Mountain, which for more than 1,000 years has presided over the human history unfolding in the valley below.

Today, the gentle ridges of this landscape are home to the residents of Indian Camp Ranch, a 1,200-acre residential subdivision. But in the seventh century A.D., this same plot of earth was home to a different kind of community, one founded by Pueblo farmers who were part of a larger, colonizing migration into the central Mesa Verde region. The time was the Basketmaker III period (A.D. 500–750), and throughout the region, people began establishing not just farmsteads but community social institutions that would become hallmarks of later Pueblo society.

Starting in 2011, Crow Canyon archaeologists, assisted by student and adult participants in the Center’s archaeology programs, began field investigations at selected Basketmaker III sites in Indian Camp Ranch. Because relatively little is known about this early chapter in Pueblo history―and because this was Crow Canyon’s first foray into Basketmaker archaeology―researchers had many questions. Where did the Pueblo people who first settled the central Mesa Verde region come from? How and why did early communities develop? What impact did a growing farming population have on the environment?

Though the data have not yet been completely analyzed, evidence gathered over the first four field seasons―including the results of test excavations and remote-sensing surveys―has already begun to paint a picture of Pueblo life in the seventh century A.D.

Artifact and architectural evidence suggests that the people who settled the study area had emigrated from areas to the west and perhaps south in the very late A.D. 500s. Because excavators rarely found wood suitable for tree-ring dating, most date estimates are based on less-precise methods such as archaeomagnetometry, accelerated mass spectrometry (a form of radiocarbon dating), and pottery seriation. Nonetheless, researchers believe that a very large site on one of the highest ridges in the ranch was the first to be built, sometime in the late 500s or early 600s. Called the Dillard site (5MT10647), this settlement included several pithouse residences in two clusters north and south of a very large, centrally located structure called a great kiva, the earliest such structure ever documented in the central Mesa Verde region (view site map).

With a diameter of 11.5 meters, the great kiva is an example of what archaeologists call public architecture. Its presence indicates that the Dillard site was the focal point of the community, which Crow Canyon researchers believe initially included the adjacent pithouses but later encompassed scattered farmsteads at greater, but still walkable, distances. The great kiva was where members of the growing farming community would have gathered for important religious and civic events, promoting a sense of unity and common purpose.

The occupation of the Dillard site as a whole appears to have peaked in the mid-600s. The pithouses at the site continued to be occupied a little longer, perhaps until the late 600s, but the great kiva was probably used into the early to middle 700s, during which time it served the needs of the more-dispersed community of small farmsteads that had grown up around it. Test excavations at three of these smaller sites indicate they were occupied from the middle-to-late 600s through the early 700s. None is exactly contemporaneous, however, suggesting that the population of the community at any given time may have been relatively low.

Maps produced as part of the Village Ecodynamics Project show the distribution of sites at Indian Camp Ranch during the Basketmaker III (A.D. 500–750), Pueblo I (A.D. 750–900), Pueblo II (A.D 900–1150), and Pueblo III (A.D. 1150–1300) periods. Clearly, the community that was centered on the Dillard site in the seventh century didn’t disappear but, rather, shifted and reconfigured itself on the landscape over time.

To understand that process―how communities formed and re-formed over many years―in the 2015 field season, Crow Canyon tested five sites located on a prominent ridge about 1.8 kilometers (1.1 miles) southeast of the Dillard site. From south to north, the five sites are Sagebrush House (5MT10687), the Badger Den site (5MT10686), the Pasquin site (5MT2037), the Dry Ridge site (5MT10684), and an as-yet-unnamed site (5MT10685). Collectively, they are referred to as the “Hatch group,” after the current landowners, Pat and Sarah Hatch. And though they were recorded as separate sites by surveyors in the 1990s, there is little doubt that at least four, and possibly all five, were part of a single large village.

Pottery sherds visible on the surface indicate that the Hatch group dates primarily from the Pueblo II period, but there is also evidence of Basketmaker III, and possibly Pueblo I and Pueblo III, occupation as well. And that’s what makes this group of sites attractive from a research perspective.

“On this one ridge we can potentially study continuity and change in a community over a very long time span,” said Susan Ryan, Crow Canyon’s Chief Mission Officer. “The first four years of the project, we dealt with a single-component site at Dillard. Now we’re moving to a place on the landscape that will give us a lot more information about how that legacy continued through time.”

The research questions archaeologists hope to answer with the new excavations are extensions of those that guided the first four years of the project, and they focus on several interrelated topics: population size and movement, community development and continuity, and human impacts on the environment.

“If we look at the site distribution maps for the study area, there seems to be a pretty big decline in population at the end of Basketmaker III and some shifting of sites along the ridges,” said Supervisory Archaeologist Caitlin Sommer, who directed Crow Canyon’s fieldwork in 2015. “Why is that? We know the ridgetops have the best soils for farming in the study area, but it’s possible those soils had been depleted in the areas surrounding some of the Basketmaker farmsteads. We also see people leaving some of those early sites and not coming back until the Pueblo II period. Is that because enough time had passed for the depleted soils to recover?

Another question Crow Canyon researchers are asking relates to community organization. “Collectively, the sites in the Hatch group are bigger than the Dillard site,” said Sommer. “If most or all of the structures were occupied at the same time, then Hatch probably represents the greatest degree of population aggregation during Pueblo II in the study area. What are the implications for Pueblo II community organization? How does this community compare with earlier and later communities, not just within the ranch but across the broader region?”

Testing of the sites in the Hatch group poses special challenges for Crow Canyon researchers. The ridge on which the sites are located was plowed in the past, and cultural deposits at four of the sites were disturbed in the 1980s by heavy equipment operated by individuals searching for artifacts to collect and sell (several years before Indian Camp Ranch was established). So, in a sense, Crow Canyon’s work is a rescue project―an attempt to salvage as much scientific evidence as possible.

As challenging as the work might be, Ryan says it’s worth it. “The Hatch group is an important part of the Basketmaker legacy. It could represent the end of the community occupation that began hundreds of years earlier at the Dillard site. Given the potential significance of the sites, we need to try to learn as much as possible from them.”

The Basketmaker Communities Project was supported in part by grants from the National Science Foundation and History Colorado-State Historical Fund.

Webinars
Who Are the Southern Utes?