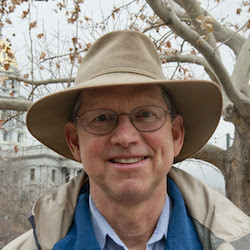 Richard H. Wilshusen (Ph.D. University of Colorado, 1991) is an independent consultant; he recently stepped down as the State Archaeologist/Deputy SHPO of Colorado. He is a former Director of Research at Crow Canyon and has collaborated with the Center on a variety of investigations over the last two decades. Most recently he has co-authored several publications focused on the early Pueblo period with the Center’s staff.

Rich has 35 years of experience as a field archaeologist, professor, curator, and contractor. He has worked with universities, CRM firms, state and federal governments, and tribes. Wilshusen is best known for his research on early Pueblo village formation, demography, and migration pathways. His more recent work focuses on the earliest great house communities of the Chaco region, Navajo ethnogenesis in the Dinétah region, and current issues in public archaeology. Wilshusen is the senior editor of Crucible of Pueblos (2012), co-editor (with Mark Varien) of Seeking the Center Place (2002), and author or co-author of more than 30 book chapters or juried journal articles. He served as the State Archaeologist/Deputy SHPO of Colorado from 2010 to 2015. Throughout his career, Wilshusen has had the good fortune to work with a number of cross-disciplinary teams on a wide range of fundamental archaeological issues. He counts his lucky stars that he has made a living doing archaeology.