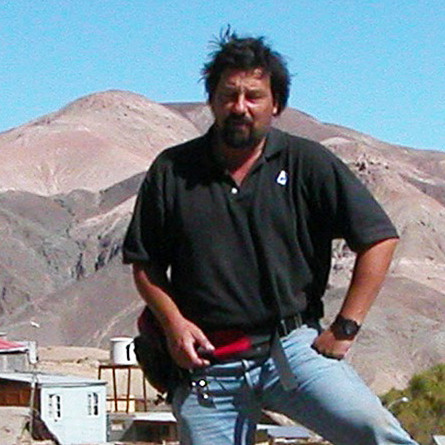 Chip Stanish (Ph.D. University of Chicago, 1985) is a professor in the department of anthropology at the University of California, Los Angeles and the director of the Cotsen Institute. His research interests include Andean archaeology, complex society, and political economy. The Lake Titicaca Basin in highland Peru and Bolivia represents one of the great centers of preindustrial civilization in the world. His survey and excavations along the shores and on the islands of Lake Titicaca have uncovered numerous sites that span more than six millennia of human occupation. Recently, he has been excavating the remains of a house from the seventh to ninth century A.D. on the Island of Esteves, near the northern shore of the lake. This architecture was associated with a large pyramid and temple complex that was the center of the Tiwanaku (ca. A.D. 400–1000) state’s provincial administration of this territory. The high quality of pottery and other objects associated with this house complex indicates that it was inhabited by an elite group, possibly Tiwanaku administrators or artisans. Chip has numerous publications and grant awards, and is a Member of the National Academy of Sciences, a Fellow of the American Academy of Arts and Sciences, the Lloyd Cotsen Chair of Archaeology, and a Senior Fellow at the Dumbarton Oaks Research Library.