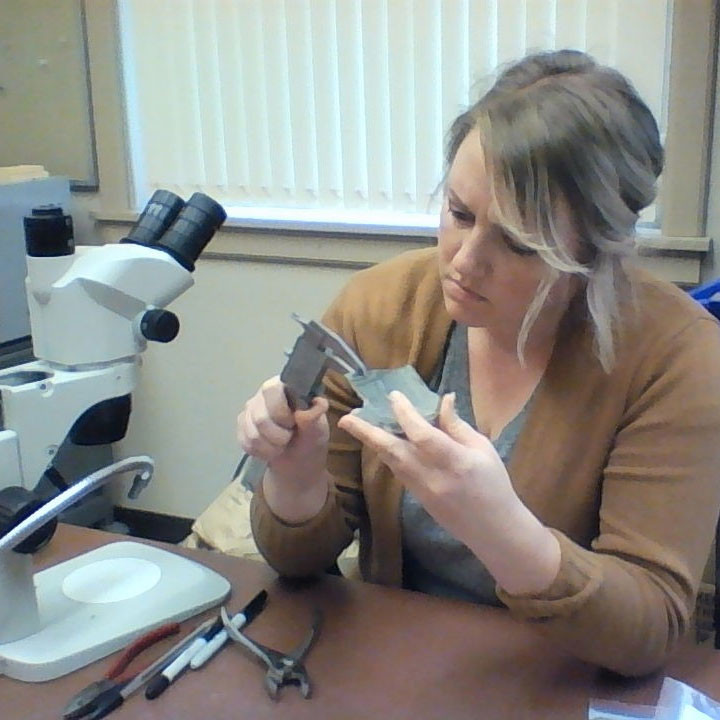 Katie Richards is a doctoral candidate in the anthropology department at Washington State University. Katie’s love for archaeology began in the fifth grade, so it came as no surprise when she enrolled at Brigham Young University (BYU) and declared her major as anthropology. Katie graduated with her B.A. in 2009. She continued her graduate education at BYU, producing a thesis titled Fremont Ceramic Designs and Their Implications and receiving her M.A. in 2014. That same year Katie entered the Ph.D. program at Washington State University (WSU) to continue her professional development.

Katie’s research focuses on Fremont social and political organization and the relationship between the Fremont culture area and the Pueblo culture area to the south. She has pursued this research since 2007 by conducting archaeological survey, excavations, and laboratory analyses, including work at many important sites in both the Fremont and Ancestral Pueblo regions. The results of her research have appeared in several publications that use pottery and architecture to examine the social organization of Fremont and their relationship with their Pueblo neighbors.

Katie seeks to conduct research that produces a thorough re-evaluation of the Fremont concept: as a region, as a culture, and in terms of its interaction with the Pueblo world. She views this reassessment as an ambitious but necessary goal. The Lister Fellowship provides support that will help her achieve her objective.

Katie’s research critically examines the concept of Fremont as an archaeological region and culture area. Located north of the Pueblo Southwest, the people archaeologists call Fremont lived mostly in what is Utah today and in southeastern Nevada and far western Colorado.

Despite over one hundred years of research, Fremont remains a contested concept, and different camps of archaeologists view the Fremont in mutually exclusive ways. Some highlight shared traits that span the region while others argue that regional variation is so great that the term is not useful. Some view Fremont people as having developed in situ and in isolation while others argue that influence from the Pueblo Southwest shaped Fremont culture in important ways. Katie seeks to resolve these debates by conducting research that combines a fresh theoretical framework, methodologically rigorous analysis of ceramics, and a multi-scalar analytical approach

Katie argues that viewing Fremont as a frontier of the Southwest provides a better prospective from which to understand the unique blending of local and southwestern traditions prevalent in Fremont material culture. Frontier theory examines the interaction between neighboring culture areas that included a larger core area with a longer history and a smaller more recently settled frontier. Frontiers are zones of cultural hybridity where local populations co-reside with recent migrants. The resulting frontier culture blends tradition and innovation as migrants and indigenous populations renegotiate their social identity.

Katie examines the construction of Fremont social identity through the analysis of painted ceramics. She focuses on the time period from A.D. 1000–1350 when large villages formed in the Fremont region. She analyzes Fremont painted ceramics at three scales: macroregional, regional, and the subregional or village scale. The macroregional scale includes the entire Fremont area and the adjacent areas of the Pueblo Southwest. The regional scale examines ceramic production and exchange across the Freemont region. The subregional scale documents the use of ceramics at individual Fremont villages.