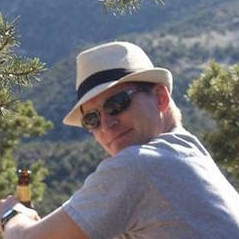 James M. Potter (Ph.D. Arizona State University, 1997) is a Senior Archaeologist and Principal Investigator at PaleoWest Archaeology. He collaborates with Crow Canyon on grants that form a partnership between PaleoWest, Crow Canyon, and the Ute Mountain Ute Tribe. These grants support the documentation of threatened archaeological sites on Ute Mountain Ute land and develop preservation plans for these sites.

Jim earned a B.A. degree from UC Berkeley in 1987 in Anthropology and Ancient Near Eastern Archaeology. From 1990 to 1997 he attended Arizona State University, earning a masters and PhD degree in Anthropology. He has worked in Jordan, Spain, Israel, and throughout the western US, but his research has concentrated solidly in the American Southwest. Since his dissertation, which focused on the Pueblo III to Pueblo IV transition in the El Morro Valley, he has worked in the private sector as a cultural resource Principal Investigator. He has specialized in large projects requiring significant interaction with tribal communities, including the Animas-La Plata (ALP) Project in southwestern Colorado, one of the largest cultural resources projects in the country at the time. Since ALP he has worked closely with the Ute Mountain Ute Tribe in establishing their THPO office and securing grants for large-site documentation and preservation on tribal lands. He is a co-editor of the book entitled The Social Construction of Communities: Agency, Structure, and Identity in the Prehispanic Southwest published by AltaMira Press and has published articles in American Antiquity, The Kiva, The Journal of Field Archaeology, and the Journal of Anthropological Archaeology. His research interests include community organization, diet and cuisine, social identity and conflict, and the prehistory and history of the American Southwest.