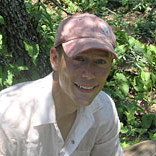 Matt’s research interests include developing economic and mathematical models that quantify the interactions between humans and their environment and that identify the emergent properties of the resulting interactions. In addition, he is working with a research team to develop methods for sourcing marine shell based on oxygen and stable carbon isotope ratios. He also uses petrography to source the location of pottery manufacture and reconstruct pottery-exchange networks.

Matthew was drawn to eastern Sonora for his research because of the strategic location of the region and because of the dearth of information from the area. He is excited to conduct research that will provide important results in its own right and that will lay the foundation for future research in the region for decades to come.

### 2013 Fellow Abstract
Matthew’s dissertation focuses on an area that has received relatively little research: eastern Sonora, Mexico. Titled Traders and Farmers: 10th to 16th Century Occupation of the Rio Moctezuma Valley, Sonora, Mexico, his dissertation focuses on the period immediately before Spanish colonization. Archaeologists have long speculated about the importance of this region during this time period: was it a conduit for Mesoamerican influence; an area settled during a diaspora of Hohokam and Mogollon emigrants; or, along with the Pueblo communities of the southwestern United States, was it one of the last major population and political centers to remain after the demise of Paquimé? These are important questions, but the archaeological evidence from the region is currently insufficient to provide answers. Matt’s research seeks to fill this important gap in our knowledge.

Despite being a critical component in any macro-scale reconstructions of ancient history in the southwestern United States and northern Mexico, eastern Sonora has received extremely sparse archaeological attention during the last 40 years. It even lacks a basic chronology. Matt’s research will provide the first chronological sequence and the first comprehensive reconstruction of social organization for the region. He will accomplish this by conducting a settlement survey in the Moctezuma Valley and analyzing legacy data from neighboring valleys.

Matthew’s research will provide the first estimates for the number of people living in the study area and will assess how population size changed during the late period. He will also conduct artifact-sourcing studies to reconstruct local pottery-exchange networks and long-distance exchange of obsidian and shell. His analyses of regional demography and exchange networks will allow him to reconstruct the region’s social organization and evaluate existing but untested models about eastern Sonora settlement and the role it played in the ancient history of northern Mexico and the southwestern United States. He will determine whether any existing models are correct, or if an entirely new model is needed to understand this important region during the period before Spanish colonization.