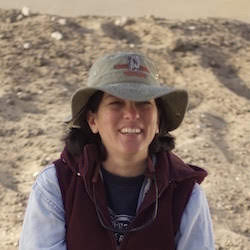 Donna M. Glowacki (Ph.D. Arizona State University, 2006) is an Associate Professor of anthropology at the University of Notre Dame. She has worked with Crow Canyon in a variety of positions since 1994 and most currently was a senior researcher on the Village Ecodynamics Project (VEP) where she lead the Mesa Verde Community Center survey from 2009–2012. She continues to collaborate with Crow Canyon on publications that utilize data from Crow Canyon’s excavations and the VEP.

Donna has conducted fieldwork at seventy-six of the largest sites in the central Mesa Verde region and is interested in understanding long-term and large-scale social change including the role of religious transformation and sociopolitical reorganization in the regional depopulation of the northern San Juan region at the end of the 1200s. She recently completed in fieldwork at Mesa Verde National Park that focuses on village formation and aggregation at Spruce Tree House cliff dwelling and other large sites throughout the Park. She is the author of Living and Leaving: A Social History of Regional Depopulation in Thirteenth-Century Mesa Verde (The University of Arizona Press).