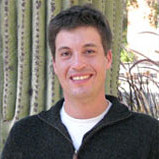 Sam Duwe (Ph.D. University of Arizona, 2011) was first exposed to archaeology when his fifth-grade class from Elk Creek Elementary School in Pine Junction, Colorado, attended a program at Crow Canyon. Sam began to develop his research focus as an undergraduate at the University of Michigan, where he learned to conduct instrumental neutron activation analysis for his Senior Honors thesis, which addressed questions of pottery provenance at late-phase pithouse sites in the Taos District, in the Rio Grande region of northwestern New Mexico.
A stint as crew chief on the University of Arizona field school in east-central Arizona led to his Master’s project, which focused on community organization at the Bailey Ruin. Using inductively coupled plasma mass spectrometry to discern unique “recipes” for slip and paint used on decorated pottery, Sam explored questions of craft production, community organization, and apprenticeship relationships among potters at a single site. For his dissertation research, he returned to the Rio Grande drainage to study the processes of coalescence that accompanied the formation of Tewa pueblos after A.D. 1150.
Sam has also conducted research at Early Copper Age (ECA) sites in Hungary. There, the transition from the Neolithic to the ECA appears to be a process of “de-aggregation,” which poses an interesting counterpoint to his dissertation research on coalescence.