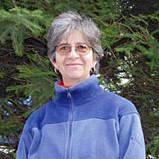 Diane Curewitz (Ph.D. Washington State University) is the Archaeological Collections Manager at Washington State University. After receiving a B.A. in anthropology from Barnard College (1968), Diane worked for many years in both education and social services, all the while maintaining her interest in archaeology and working on seasonal field projects as her schedule permitted. In 1996, she decided to pursue her archaeological interests full-time and enrolled in Washington State University’s graduate program, earning her M.A. in anthropology in 1999. The scholarships, awards, and grants she has received since resuming her academic career—including the Field Museum of Natural History Research Scholarship, a National Science Foundation Doctoral Dissertation Improvement Grant, and a Bureau of Land Management–Museum of New Mexico Research Fellowship—are a testament to the quality of her work. Diane has maintained a busy academic and professional schedule, teaching several introductory anthropology courses, serving as editorial assistant for American Antiquity, presenting papers at several national conferences, and authoring or coauthoring a number of reports and publications. As a graduate research assistant on the Cultural Resource Management Team at Los Alamos National Laboratory, Diane coauthored two reports on ceramic analysis and technology, and she has published two peer-reviewed journal articles, one in Kiva (2004) and the other in the Journal of California and Great Basin Anthropology (2001). Diane’s dissertation research focused on the relationship between pottery production and social organization in the Pueblo Southwest. Her dissertation, titled “Changes in Northern Rio Grande Ceramic Production and Exchange, Late Coalition Through Classic (A.D. 1250–1600), examines the role that ritual may have played in pottery specialization and distribution during a critical period in Pueblo history.
### 2005 Fellow Abstract
The fourteenth century saw great changes in the organization of Pueblo society in the northern Rio Grande area, changes which are as yet incompletely understood by archaeologists. The goal of the current research is to explore the relationship between pottery production and social organization at the transition between the Coalition (A.D. 1150–1325) and Classic (A.D. 1325–1600) periods, with a particular emphasis on pottery produced and exchanged at sites located in Bandelier National Monument, New Mexico. Analysis of pottery composition, technological and design attributes, and distribution patterns will demonstrate how population movement, aggregation, and a new ideological system combined to produce changes in regional production and exchange networks that affected settlement and social organization.
As part of this study, comparative measures of pottery specialization will be developed, pottery-distribution patterns will be identified, and social networks based on the exchange of high-value goods will be analyzed. It is hypothesized that a new religious ideology with an emphasis on communal feasting conferred added social value on, and increased demand for, decorated serving and undecorated culinary vessels used in feasts. Use of these vessels in these contexts identified their owners as group members and ritual participants. Access to skills, materials, and ritual knowledge would have limited vessel production and increased specialization. The physical proximity of distantly related individuals in densely aggregated pueblos, combined with demand for the vessels, may have encouraged the development of new exchange-driven social relationships and nonreciprocal exchange networks.